A Responsible Drinking Guide for Lobos!

Not all Lobos chose to drink while in college, but for those who do, we’d like to let you know that we’ve surveyed your peers, and the consensus is Lobos party smart! If you decide to drink while at UNM, we're here to help you make smart choices so that you stay on track to graduation. Below is our Responsible Drinking Guide for Lobos!

What is a Standard Drink?

Most college students are surprised to learn what counts as a standard drink. In the United States, a “standard” drink is any drink that contains about 0.6 fluid ounces or 14 grams of “pure” alcohol. Although the drinks pictured below are different sizes, each contains approximately the same amount of alcohol and counts as a single drink.

Know How Much is in Your Cup

Did you know that you can use the lines on a solo cup to measure standard drinks of alcohol? If you’re at a party, don't be clueless about how much you're actually drinking. By knowing what's in your cup, you can keep track of your drinks and proceed to drink responsibly! 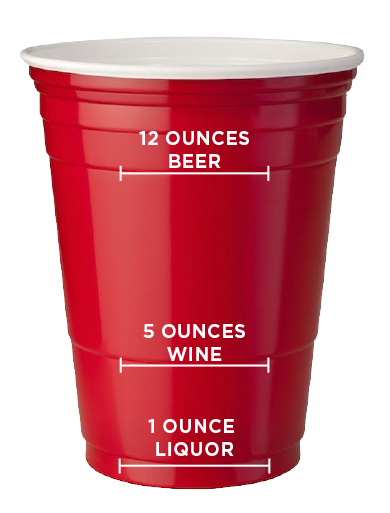 What is More Than a Standard Drink?

Here are some examples of what counts as more than a standard drink:

What is Binge Drinking?

What is Blood Alcohol Concentration (BAC)?

Blood alcohol concentration (BAC) is the amount of alcohol in your blood stream. Check out our BAC Calculator – it can help you understand how many drinks you can have before your BAC gets too close to 0.08 (the legal limit of intoxication). The chart below shows you the side-effects you can expect to experience based on how high your BAC is.

Myths and Facts About Alcohol

Fact: The only thing that sobers us up is TIME. It takes about 2 hours for the adult body to eliminate the alcohol content of a single drink, depending on your weight. Nothing can speed up this process, not even coffee or cold showers.

Myth 2: “The more alcohol I have the better!”

Fact: Alcohol is a biphasic drug. At low levels it brings on euphoria, but in larger amounts it brings more harm that fun (vomiting, blackouts, etc.).

Myth 3:“I can drink and still be in control.”

Fact: Drinking impairs your judgement, which increases the likelihood that you will do something you’ll later regret such as having unprotected sex, being involved in date rape, damaging property, or being victimized by others.

Fact: More than ½ of all crashes among 18-24 year-olds involve alcohol. The effects of alcohol start sooner than people realize, with mild impairment (up to .05 BAC) starting to affect speech, memory, attention, coordination, and balance.

Myth 5: “It’s okay for me to drink to keep up with my boyfriend.”

Fact: Women process alcohol differently. No matter how much he drinks, if you drink the same amount as your boyfriend, you will be more intoxicated and more impaired.

Myth 6: Beer doesn’t have as much alcohol as hard liquor.

Fact: A 12-ounce bottle of beer has the same amount of alcohol as a standard shot of 80-proof liquor (either straight or in a mixed drink) or 5 ounces of wine.

Alcohol poisoning is a medical emergency. By knowing what to look for, you could save a life! If you suspect someone has had too much to drink:

Call 911 immediately if the person is:

Now that you’ve read through our Responsible Drinking Guide, we hope that you’ll remember this information and make responsible choices when it comes to drinking. Lobos party smart – stay with the pack!